The Therapist Development Center takes great pride in helping social workers pass their Masters and Clinical level ASWB Exams with confidence. Our comprehensive ASWB exam prep systems review all essential content tested and provide a number of ASWB Practice Exams. To pass your exam you must have a strong knowledge base AND very strong clinical reasoning skills. We get constant feedback from our customers that our ASWB Practice Tests and questions are accurate and consistent with what they see on their tests. We also have an ASWB exam study guide and exam prep materials. We strive to provide the best ASWB study program for social workers. Below is a short sample ASWB Practice Test, so you can get a flavor of the ASWB Exam. These ASWB practice questions and rationales will show you the variety of topics tested and how to approach them. These 10 ASWB practice questions should take you 15 minutes or less to reflect the time you have on the actual ASWB Exam.

1. A therapist is meeting with a client for an initial evaluation. The client reports feeling moody and has been having many headaches. The client states that she lost a lot of weight recently and has noticed a decrease in appetite. The clinician should FIRST:

A. Assess the client for suicidality

B. Refer the client to a psychiatrist

D. Refer the client to a MD

2. A therapist has been conducting a closed 10-week group for men living with AIDS. After the 3rd session, a group member reports to the leader that they are feeling frustrated and disconnected with other members of the group. They question whether or not they want to continue. The social worker should FIRST:

A. Initiate an individual session with this group member to address their feelings of frustration and disconnect

B. Tell the group member that it isn’t possible to leave the group at this time due to the closed nature of the group

C. Encourage the group member to bring this up in the next group session

D. Use the next group session to explore how other group members are feeling and whether anyone relates to how this group member is feeling in order to encourage cohesiveness

3. Studies that collect and analyze data from the whole study population at one point in time is called:

4. A father recently noticed an upswing in the amount of gun violence in his neighborhood. As a result, he reaches out to other members of the neighborhood to hold a meeting and discuss the impact this is having on each individual, while also looking at the ways that each member can contribute to creating change. This is an example of:

5. A social worker is developing a program that assists youth who are coming out of the juvenile justice system in finding a job. The social worker has already conducted a needs assessment and identified goals for the program. Which of the following should be the NEXT step?

A. Create an action plan along with a timeline for implementation

B. Create a planning team which includes identifying key staff

6. A 15-year-old client was recently referred to a therapist at a community counseling center for an initial assessment after throwing a chair at another student at school. The mother reports this is the first incident of this type, but that the client’s parents recently divorced a month ago. In order to develop the therapeutic relationship, the therapist must FIRST:

A. Go over the limitations of confidentiality with the client

B. Complete a biopsychosocial assessment

C. Play a game to lessen the stress of the first session

D. Get a release of confidentiality from the mother to talk to the client’s teacher

A. Release the records to the court immediately

B. Release only aspects of the records that the therapist believes aren’t harmful

C. Speak with a lawyer

D. Speak with the client about the subpoena

8. During an assessment a client reports a low mood, lack of sleep, and trouble concentrating. The client reports this has been going on for the past three years. The client shares they were sexually assaulted seven years ago, but reports that they, “don’t really think about it anymore.” The client’s MOST likely diagnosis is:

9. A therapist is developing a website to promote her private practice.  It would be unethical to do which of the following:
A. Highlight the therapist’s expertise

10. A social worker is doing a home visit for a family with three kids who recently lost their mother in a car accident. The family was living in a homeless shelter and recently moved into a new home. When the social worker arrives, the social worker sees the father push one of his children on the ground and begins to punch the wall next to the child. The social worker’s FIRST response should be to:

A. Call the police

B. Make a CPS report

C. Intervene with the father

D. Take pictures of the event 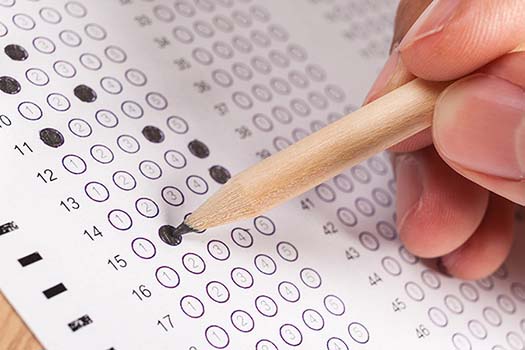 1. For this ASWB exam practice question, the correct answer would be D. The FIRST thing we need to do is make sure there isn’t a medical reason for the client’s recent physical symptoms. A lot of people choose A due to the client’s report of moodiness. The keyword here is what should the therapist do FIRST? It doesn’t mean we wouldn’t do the other answer options at some point during this session, but we need to first address the client’s medical symptoms.

2. The correct answer here is C. When working with groups we want to make sure we keep any issues that come up around the group within the group. So in this case, it’s important to encourage the client to address their feelings with the group. A would not keep the issue within the group, and B would not be appropriate because a group member has the right to leave a group. D could be done at some point, but not before we give the client an opportunity to share his own feelings with the group.

3. This is a recall question based on the ASWB exam. B is the correct answer because cross-sectional studies collect data at a single point in time from participants who are a variety of ages to see how change occurs as a person ages.

5. Since the social worker has already conducted a needs assessment and identified the goals for the program, they NEXT need to create a team of people who are able to plan, develop, and implement the program. Therefore, for this ASWB practice question, B is correct. A, C, and D would be done once the social worker has created a team of people who can then oversee that the goals are put into action.

6. On this ASWB practice exam, the best answer here is A. It’s important for the client to be aware of the limits of confidentiality before starting therapy. B, C, and D would all be options to do NEXT, but not until the therapist has addressed confidentiality with the client.

7. The best answer here is A. Since the subpoena is coming from a court directly, we must provide the court with the records. The therapist has already advocated for only part of the record to be released and since the request was denied we can’t do B. We could do C and D at a later point, but not before releasing the records to the court. Between the time we receive the initial request and advocated for limited release we should have already been discussing with the client the next steps in case that request is denied.

8. The best answer here is B. Persistent depressive disorder is diagnosed when symptoms have been present for at least two years. Cyclothymic disorder C also has a 2 year period, however for a cyclothymic disorder to be diagnosed, hypomanic symptoms and depressive symptoms must be present for at least two years which isn’t noted in this stem. A is incorrect because the symptoms are not severe enough to give a diagnosis of Major Depressive Disorder. D is incorrect because ASD is only diagnosed when the traumatic event has happened within the last month. Since the event was seven years ago, this would make D incorrect.

We hope this ASWB Practice Exam was helpful. Our ASWB exam prep program has a 95% success rate. We are passionate about helping people pass the ASWB clinical social work exam. Learn more about the ASWB practice tests with our Social Work exam prep programs at TDC. The Therapist Development Center team looks forward to helping you develop the strategies you need to pass with confidence!